- why innovation and creativity is where you should focus during economic uncertainty.

Do you know what WhatsApp, Instagram and Uber all have in common? They are are all innovations born as fruits of the 2008 financial crisis. Do you know what else they have in common? They usurped the market leaders in their respective categories by an agile ability to meet consumer needs. WhatsApp took over from MSN Messenger (Better mobile functionality and encryption), Instagram completely bypassed Hipstamatic and was gaining on Facebook for photo sharing, and Uber left every taxi and ride hailing service in the dust.

A global crisis and consequent economic downturn is a tremendous accelerator of change. Changes in habits, buying patterns, technology and consumption. The COVID-19 pandemic is no different. For most, a crisis is a shock to the established and knowns. For many it’s a tragedy and the long term consequences are both dramatic and horrible. For some, it creates an opportunity. Contrarian investors have long known that uncertainty and panic opens doors. In the words of Baron Rothschild, the 18th-century nobleman and member of the Rothschild banking family "Buy when there's blood in the streets, even if the blood is your own." He should know. Rothschild made a fortune buying in the panic that followed the Battle of Waterloo against Napoleon.

Companies who are willing to adapt, rethink their services to accommodate new habits and reshape their value propositions to cater to a consumer in need will not just flourish through this crisis, but also gain in market share and remain robust against the innovative surge that has followed every crisis since World War II

There is a very real chance that the current crisis will be prolonged, and that the consequences for the global economy will be dramatic. Through furloughs and unemployment, consumers face decreased spending power and unpredictable days ahead.. The uncertainty that prevails right now effects all layers of society.

For companies and service providers, cutting marketing budgets tends to be the default reaction to uncertainty.

In a study conducted by McGraw-Hill Research on U.S. recessions, of the 600 business-to-business companies analyzed, the ones who continued to advertise during the 1981-1982 recession hit a 256-percent growth by 1985 over their competitors that eliminated or decreased spending. This is not an accidental number - but a recurring fact that is replicated through most cycles of economic downturn. 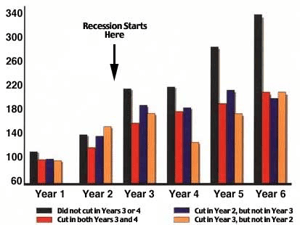 Amazon sales grew by 28% in 2009 during the “great recession.” Instead of cutting costs and hold back on R&D, amazon “powered out” with new products for a poorer economy with most notably the launch of the Kindle products that drove market share.On Christmas Day 2009, Amazon customers bought more e-books than printed books. As a result, in the minds of consumers, Amazon became the company associated not only with “innovation” but also as one introducing a lower cost alternative to cash-strapped consumers.

Brands that increase advertising during a crisis, when competitors are cutting back, can improve market share and return on investment at lower cost than during a booming economy. But when navigating the landscape, messaging is critical for success.

Guidance, reassurance and establishing a communal sense “we’re going to get through this together” spirit are vital ingredients of successful marketing during a recession. Altering and customizing communications and marketing strategies to accommodate this is the difference between success and failure.

Publicis Groups Chief Growth Officer Rishad Tobaccowala who has advised dozens of clients on steering through macroeconomic storms has the following advice for brands:

Capability. “The last thing a brand wants to look like is that they’re scared and don’t know what’s going on. If you keep quiet in a crisis, people will say, ‘What the hell happened to you?!’”

Integrity. “The world doesn’t know who to trust, so you need integrity. You don’t say something and do something else.”

Empathy. “Whether it’s to employees, or to customers, they are facing a very different world.”

Inspiration. “Everyone is down. Without being Pollyanna about it, look at how you can give people hope.”

Vulnerability. “[Communicate that] we are confused and scared too.”

By creating engaging content that speaks to the situation of your audience, you can enable multiple methods of demonstrating the benefits of your service or product. Content marketing done right focuses on the value your product has for the user based on their reality, not yours. It’s outcome driven and made with empathy it creates a foundation for long-term relationships. Dare to invest in a meaningful relationship with your audience and future sales will come from it. Then you will overcome this crisis in the best potential way. Do not forget that marketing is an investment for the future.

Perhaps the best quote about advertising in a recession came from Sam Walton, the founder of Wal-Mart. When asked, “What do you think about the recession?” he responded, “I thought about it and decided not to participate.”

Want to learn more about Strossle and how to engage the right audience for your content? Click here!