Online publishers know that the time spent by users on their site is a key factor in their business. The longer users stay on the site, the more content they consume. This increases the chances that the users will share the content and attract new visitors. Brand loyalty is rising and so is direct traffic. All this leads to the company cashing a nice check from advertising sales.

The daily bread of online media is to think about how to keep the users on their site for as long as possible. The secret sauce is a mix of interesting, relevant content and a great user experience. Data, which sites use to personalize content automatically, play an important role in the process.

Revenue increased with the new technology

That’s why Zoznam decided to try a new technology provided by mediatech company Strossle. Zoznam wanted to compare Strossle’s automated content recommendations to having their editors doing it manually. The technique provided by Strossle selects content relevant to the user based on collected data and automatically renders it in a box customized to fit the site’s look and feel.

Testing started on the Topky.sk site in March 2016, a site that had, so far, only offered articles related to the topic. Zoznam chose the following Key Performance Indicators (KPI) to evaluate the two different ways of doing recommendations:

A supplementary parameter was the influence on lowering the costs, increasing the revenue, and generally optimizing the content distribution.

The old recommendations box displaying related articles had been used for years at Zoznam, and was developed internally. It was placed on the right side of every article and moved down as the user scrolled. The content was hand-picked by editors and as the editors finished an article, they cross-checked it with the database, found suitable related content, and matched it to the new article. 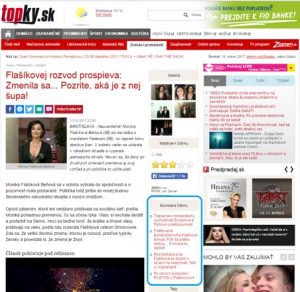 The Strossle box was instead placed at the bottom of the article, below two 300×300 banners. It doesn’t scroll and unlike related articles, it also shows images. It uses design elements of the hosting site, like font, font size, or image format, which means the user can’t tell it apart from the rest of the site. The content is picked automatically, with no editorial intervention. The selection is combined with advertising links, which generate extra revenue for the publisher.

From the start of the test, automated recommendations have performed better than related articles selected by editors. In March 2016, the manual selection reached 3.12% CTR, the automated selection 5.79%. This is improvement by 85%. Since automated recommendations display at the end of the article and below ads, that is, they’re not visible on loading, the inview CTR was also measured, with the result of 12.98%.

In the course of time, as Topky visitors consumed more content and the robot categorized it better, CTR rose even further. In December 2016, the manual selection scored 2.59% CTR, while the automated selection 7.86%, which means improvement by 303%. The inview CTR rose to 19.91%.

Results of the key parameter assessment indicated that users who engaged with Strossle automated recommendations generated on average 22% more page views per session, the average session duration was prolonged by 48%, and bounce rate improved by 34%.

The improvement in the quality of visitors raised the overall display revenue of the site by 1%.

Following these results, Zoznam deployed the Strossle technology in its whole portfolio and in September they launched a new format – selling native advertising in recommendation boxes.

“Strossle helps us grow. We’re monetizing existing content with no additional cost. Our visitors read more articles and stay on our site for longer. The new source of revenue is an extra bonus. I love it.”,