At Strossle, we believe in the power of great content. Great content communicates to consumers in a non-intrusive way and helps brands to build sustainable relationships with their consumers. Our goal is to let quality journalism from digital publishers attract the right users with the right content.This creates engagement, builds media brands and puts the user first.

Strossle teamed up with Coca-Cola to take on a tough mission: To make an impact on the Coca-Cola brand recognition. People in marketing know that this is tough when you work with one of the most famous brands in the world.

Coca-Cola had published great content on the page ‘Coca-Cola journey‘. Strossle and Carat deci- ded to distribute the content throughout Strossle’s premium network of publishers across Denmark. Strossle’s recommendations are always distributed as native recommendations in widgets mixed with true editorial content on the publishers’ sites. This puts great content where it belongs: In the context of quality journalism.

The campaign was running for three months and generated 25,000 unique visitors. As the goal was to achieve an uplift in brand recognition, a survey was carried out after the campaign period to compare those who had visited one of the articles that Strossle recommended with those who had not.This was done through a third-party company to make sure that the data was correct — and the numbers speak for themselves:

"With Strossle, Coca-Cola has the possibility to distribute content in an editorial context. The conducted analysis showed great quality with regards to both context and readers. Respondents displayed to the campaign showed a positive increase on several of the KPIs that was set for the campaign. All in all a great execution." 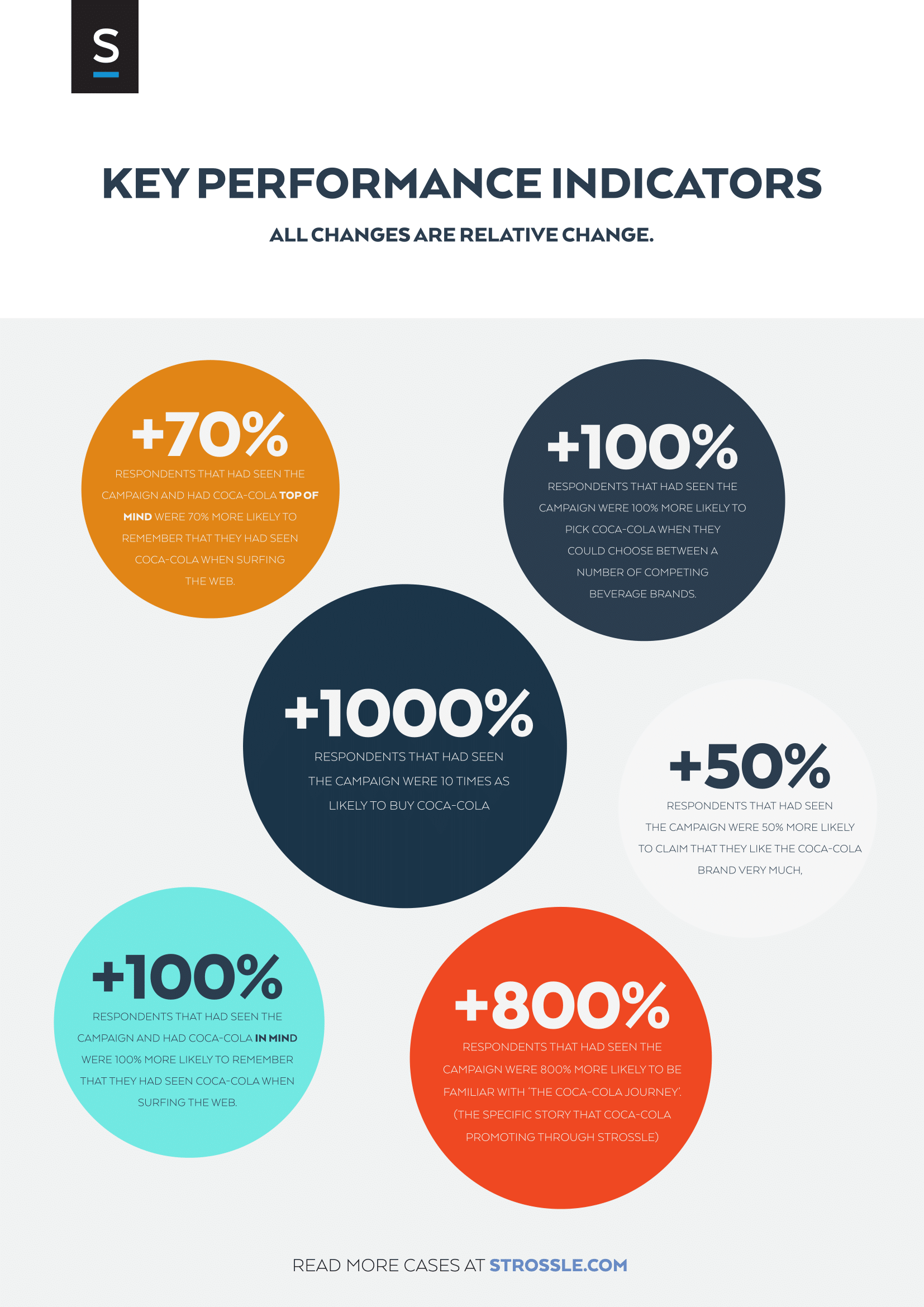 6 Articles You Might Like
Are you studying for the wrong test? Brand Performance - a guide
Rickard Lawson
Here we go again, but this time will be different!
admin
Marketeers: What can you learn from a 15 year old with an iPhone?
Henric Smolak
Too Much Focus on Conversion Will Hurt Your Brand
Dan Willstrand
Why We Love Engagement (and You Should Too)
Dan Willstrand
5 Horrible Mistakes You are Making in Your Content Distribution Strategy
Dan Willstrand
Do's and Don'ts for a Successful Content Marketing Campaign
Dan Willstrand
7 TED Talks That Anyone Working With Engagement Should Watch
Dan Willstrand
Musk quits Tesla to Join Bitcoin Startup? Another Fake Story Promoted via Facebook
Dan Willstrand
How to inspire people to find your content
admin
Paid reach added 800% more page views to true native campaign.
Filip Kuna
Leading the way to the future of money
Leo Heijbel
Guide: The 10 Best Performing Native Ads in 2017
Dan Willstrand
10-20-70–Your Ideal Content Marketing Measurements
Filip Kuna
Time Spent should mean more to Publishers than Unique Visitors
Filip Kuna
10 Free Online Marketing Resources That Every Online Marketer Should Use
admin