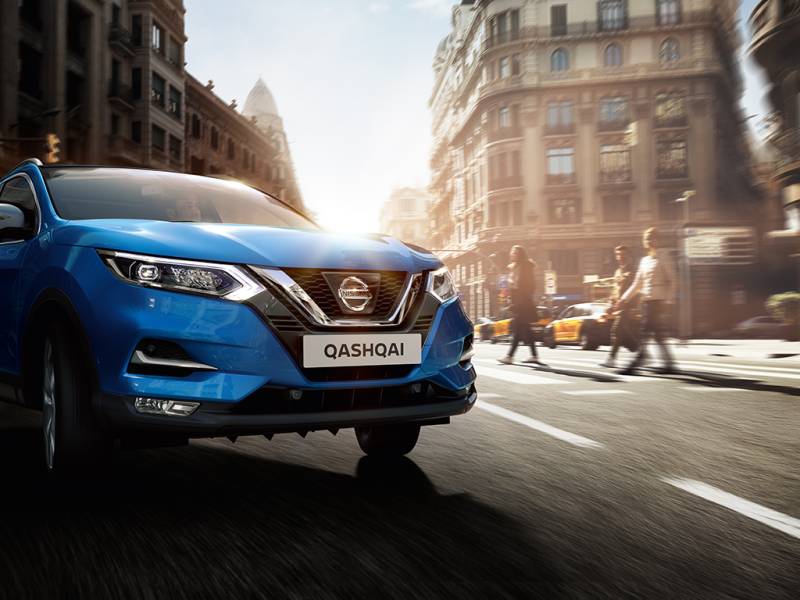 Nissan is one of the world's leading car manufacturers. The Japanese carmaker has been on the market for a respectable 108 years, and became part of the  the French Renault group in 1999. There are over 130 000 employees within the structure and 5,7 million cars were sold in the last year. The Nissan brand  Nissan’s portfolio is diverse - it comprises 41 different car models that satisfy the needs of drivers all over the globe. In addition to this, East Asian cars are considered among the safest cars on the market, an attribute that contributes to their popularity.

Content marketing is not just about articles and videos

When thinking about Content Marketing, many marketeers will recall a neat article or a high-quality video. However, other forms of content should not be neglected; for example like micro-sites. This is the way Nissan went while launching their brand-new model Nissan Qashqai. 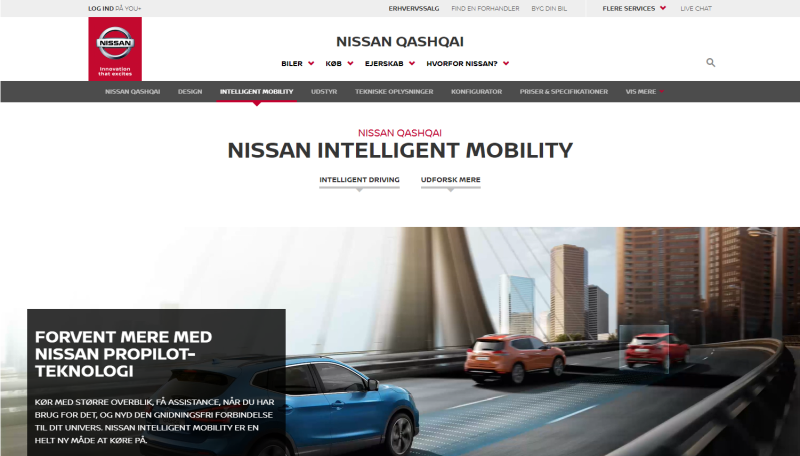 Nissan’s micro-sites contained catching articles and high-quality pictures of the car. The micro-sites also included information about new technologies, design, prices, and promotions. Readers interested in the car could leave their contact information, find the nearest dealership or book a test drive directly via the site. The micro-site also contained a "car configurator" which allowed the users to build a car with all the desired special features.

How to differ from the competition

Without distribution, content will struggle to achieve an audience. The most common mistake in content marketing is to spend the budget on production, and then neglect the importance of attracting attention. As a general rule, successful marketing allocates 20% of the budget for production, 10% for monitoring and analytics (pre and post) and 70% for distribution.

Nissan needed to generate unique and high-quality visits to their site. For this reason, they used a Strossle's network which allowed them to display their ad in tens of the most read Danish online media. The links were displayed in editorial articles; capturing readers attention while they were already engaged in media consumption and contextually susceptible to engaging content about Nissans products. Thanks to the native advertisement solution, the invitation to engage with Nissans content blends into the reader experience and even allows browsers using ad-blocking tools to see the ad.

Several versions of the ads, with different headlines and pictures, were used for testing. These versions were launched at the same time and based on the click-through rate (CTR) for each one, only the three top-performing ads were then selected to run until the campaign’s end. Nissan’s ads were viewed 10 million times, with 49 000 clicks to the website during a month. The best out of the three ads received 16 985 clicks with an above-average conversion of 0,83%.

For campaigns in which the advertiser pays for a click, an unexpected bonus are all the impressions that are delivered when a reader sees an ad but does not click on it. This was exactly Nissan’s case; their products were visible to all the readers in the network who were looking for more content after having finished reading a specific article. 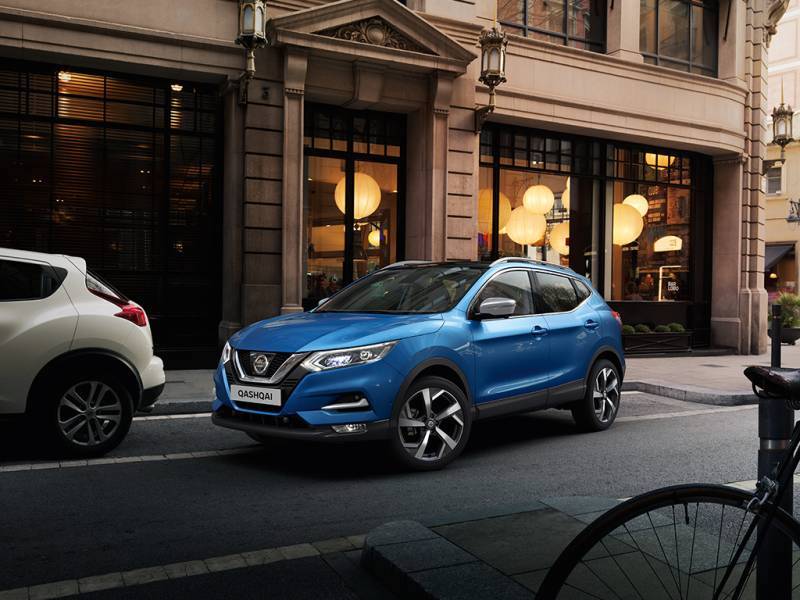 Impact on awareness and will to buy

Once the campaign had finished, Nissan started to analyze the results and the campaign’s impact on the awareness of the brand. Participants divided into two groups were surveyed by AudienceProject to collect relevant data based on this campaign. The first test group had had the ad displayed in its suggestions. The users clicked on the ad and were redirected to the Qashqai’s product page. This group was compared with the second group; a so-called control group, whose users did not click on the ad; therefore were not redirected to the product page. This dual group sampling should have determined – with a minimum of 95% probability – whether there is a difference between those two groups. It should be noted that there were also other Nissan’s marketing activities during the campaign; i.e. the communication was not limited at all. 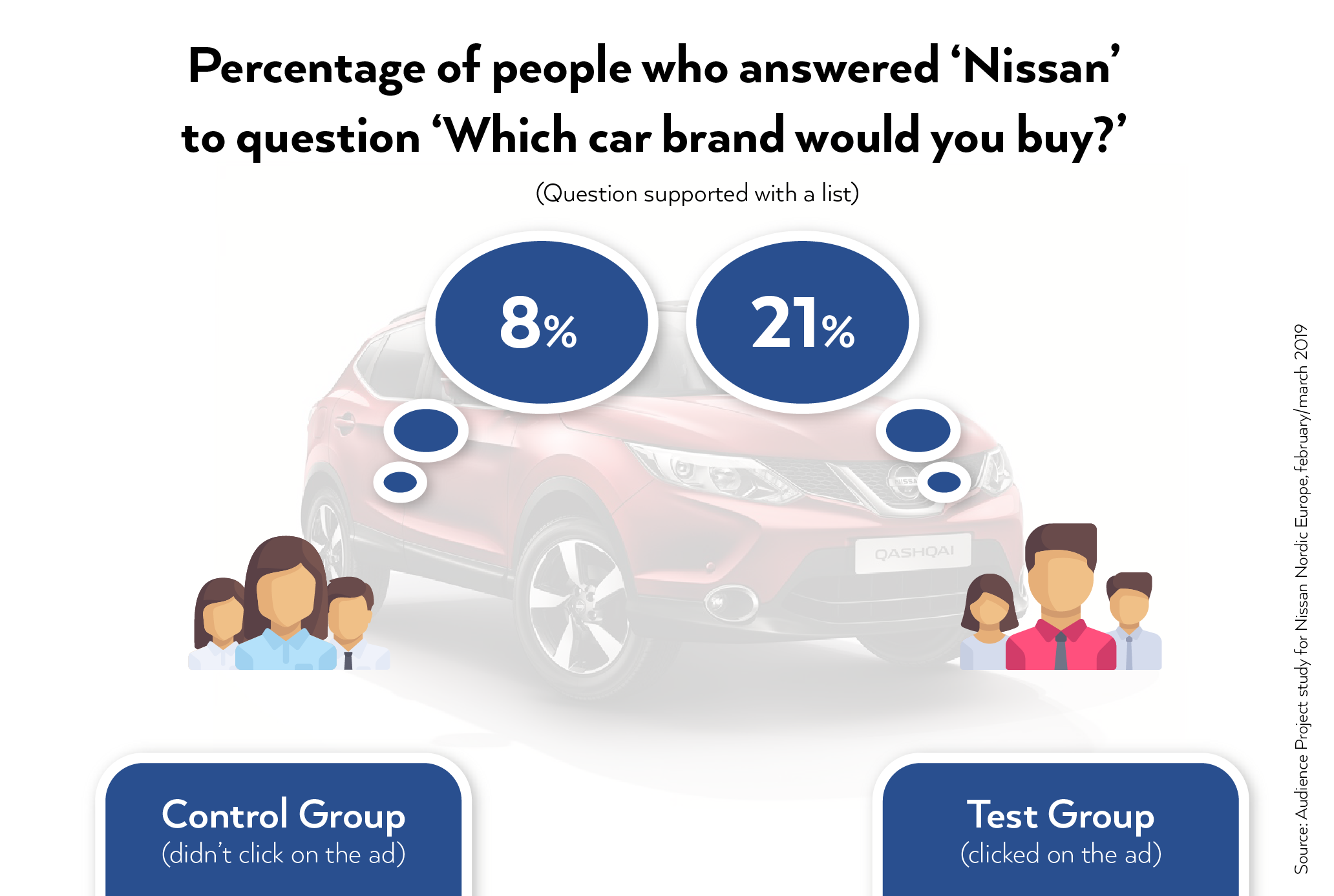 The very first question the respondents received was which car brand they would consider buying. The question was supported with a list of different cars’ brands and the respondents were to pick one, or a couple of them. 21% of the people in the first group had included Nissan as one of the manufactures they were interested in, compared with the second group in which only 8% of the people had selected Nissan. 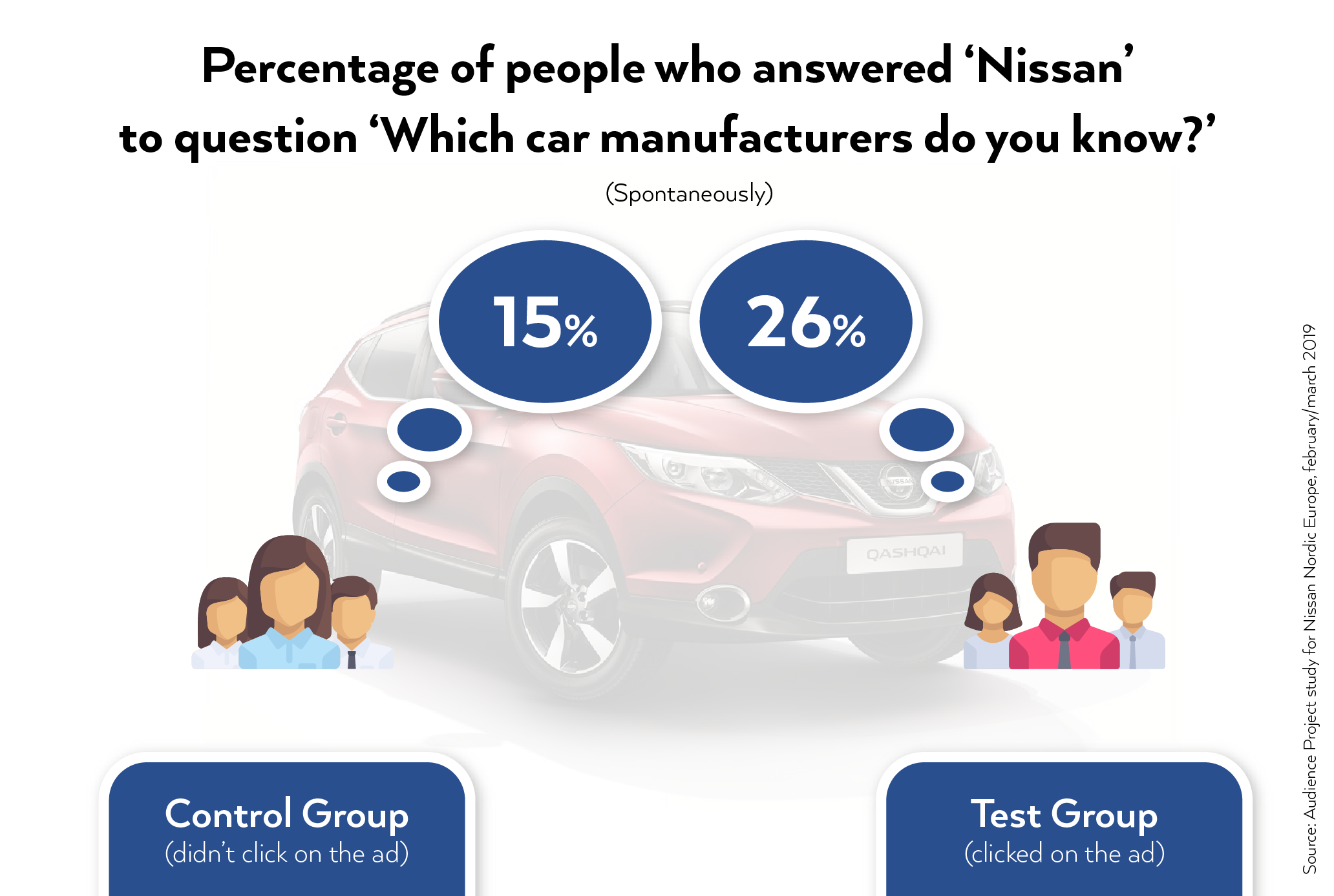 The respondents were asked to spontaneously name a brand off the top of their head. To the question “Which car manufacturers do you know?”, “Nissan” placed first among 9% of the respondents. This was three times more than what the second group had said.

As seen, a combination of interesting content with smart distribution through content recommendations from Strossle can rapidly increase a brand’s awareness and the will in buying the product. Nissan’s Qashqai product page introduced the new car model, its use and advantages. Using the recommendation windows the car manufacturer reached tens of the most influential media in the country, thus reaching out to the readers. There are many other companies, and not only car manufacturers, with the same possibilities and the same desire to expand their brand and product awareness. With great results in a fast- moving consumer market can be named Coca-Cola, or Santander as a banking sector representative.