The Family & Business Club Penati is a private club, situated in pleasant and quiet surroundings in Bratislava, Slovakia. The number of members is restricted to 275, which is the maximum that can be accommodated while maintaining the club’s top-quality services.


Content marketing chosen to attract new members
When the Penati club had a few vacancies for prospective new clients the club decided to introduce their concept through content marketing. Given that both the product and its target group are highly specific, the request was to implement a native campaign. 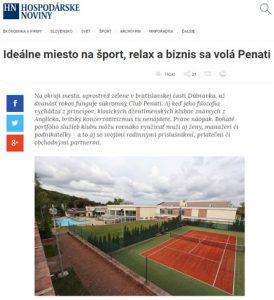 The campaign for the client was run by Digiline, the largest digital marketing agency in Slovakia. Native advertising was chosen as the main communication channel and an article was produced and published on the prestigious financial news portal Hnonline.sk.

The article was written in collaboration with HN Online editors. A journalist and a photographer were dispatched to the spot and sat down to chat with the club’s management to get insight into the establishment’s philosophy and its clients. The result was an extensive article about the club, whose form and content were adjusted to suit the audience of the HN Online website.

On its publication, the article generated organic views from visitors who opened it directly from the main page. During the first 5 days of the campaign, the article was opened 1,666 times. In a standard campaign that does not promote PR articles through other channels, this would be the final total and the cost per click would be over €1. 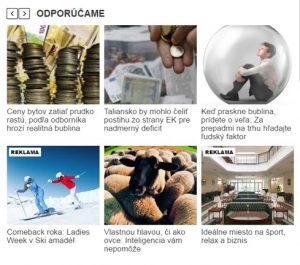 Paid distribution lowered cost per click (CPC) by 80%
Since the article was the lead format in this campaign, Digiline chose to promote it through other paid online channels: Strossle and Google Display Network. Paid advertising generated 13,825 clicks on the article, that is, over 8 times more than organic views. This boosted the article among the top 10 most read posts on the website. The cost per click ranged between €0.1 and €0.2, hence up to 80% less than in organic views, and ultimately, it contributed to cutting the average cost per click down to €0.27.

The gray area marks the first five days of the campaign, when both organic (article published on the main page) and paid clicks (Google and Strossle) visited the article. After November 5, most views came from paid channels only, which extended the lifetime of the article by nearly 4 weeks.

Leverage the value of premium publishers
Since the article was tailored for HnOnline.sk readers and was supported by additional interested visitors via the Strossle and Google Display Networks, the average reading time was about 3 minutes, which is approximately 50% more than in standard PR articles published on the website.

True Native is often limited in views by the time it can stay promoted on the top positions of the publications. Therefore it’s a good idea to purchase additional readers interested in the topic. This is vital in prolonging the lifespan of the content and decreasing the contact cost. It’s also a smart way of leveraging the value of high profile publications!

Thanks to the campaign, the Penati Club saw a clear increased interest in subscribing for membership.

"We were so happy with the campaign results. That´s why we decided to include the recommendation boxes in the portfolio of other online formats we normally use in campaigns for our clients. Strossle captured our attention with its wide coverage of Slovak publishers, transparent pricing model and targeting options.

We appreciate not only the product and customer service, but also the enthusiasm of Strossle representatives and their actions, which aim to move the entire Slovak market of native advertising forward."

6 Articles You Might Like
Another win for Strossle!
Rickard Lawson
Google goes contextual. Welcome to the show, and what it means for advertisers
Rickard Lawson
Are you studying for the wrong test? Brand Performance - a guide
Rickard Lawson
5 Great places to find Free Photos (or Videos) for your digital campaign
Rickard Lawson
Using Context - Strossle and advertiser outcomes
Hakon Tillier
e-commerce and Native ads, the perfect combination?
Marketa Pavlasova
Contextual Targeting and Native Ads, a guide for planners
Rickard Lawson
Native advertising and the Conversion factor
Rickard Lawson
Here we go again, but this time will be different!
admin
Marketeers: What can you learn from a 15 year old with an iPhone?
Henric Smolak
What we've learned so far - marketing and growth during Covid-19
Strossle
A crisis is a terrible thing to waste
Strossle
Welcome to the future! Strossle’s predictions for 2020
Rickard Lawson
Strossle International AB ranked #1 on Deloitte 2018 Fast 500
Rickard Lawson
What All Marketers Should Know About Brand Safe Distribution
Dan Willstrand
Content Marketing - What are you Really Measuring?
Malin Björck