80s power ballad or a sign of the times? In this post, Strossle’s resident prophet, Rickard Lawson attempts to describe the biggest drivers of change in the world of digital marketing and media. Ambitious? Yes, but then Norwegians at Strossle tend to punch above their weight!

The forces of change

Nobody likes change. As a species, we humans are programmed to seek stability and predictability. In business, as in our private lives, our comfort zones are tested when change becomes necessary.

But change is not always bad, on the contrary—change, although painful at first, is the harbinger of development, and development is typically for the better. But who has the power to initiate change? Disruptiveness is often the driving force of the the young and disenfranchised who feel marginalized, beaten or subjugated by the powers that be. Change can also be necessary on an institutional level. Political bodies have the power to design and execute change, as is often necessary when industrial forces have run rampant and are acting against the wellbeing and opportunities of the many.

Industries themselves are rarely positive to change. When the airline industry was confronted by sexist employment practices and advertising, they responded with claims that no businessman would take the skies if his whisky was not served by a 18-24 year old slim blonde. Large car manufacturers actively lobbied against the introduction of safety regulations in cars such as ABS brakes, air bags or crumple zones as they were structurally contrary to the sleek and light design trends of cars at the time. They argued that it was not the cars themselves that were dangerous, but that «wacky drivers» were in fact the problem.

Clearly, these industries were misaligned with the requirements of reality, and change was designed and forced upon them. Shockingly, airplanes are flying like never before, and traffic accident mortality rates are down by 80 percent. 80 percent!!

Here's a couple of examples of those ads by the way: (text continous below) 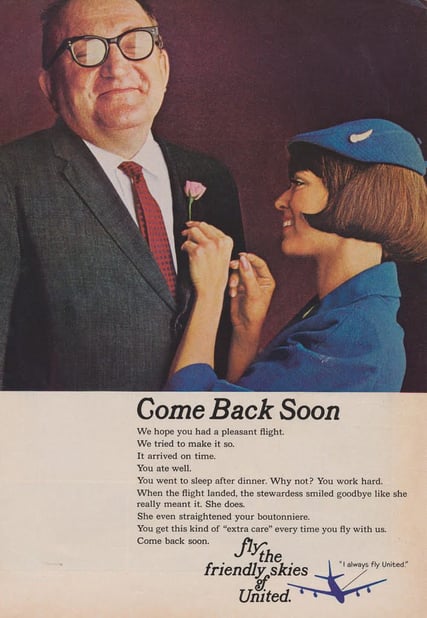 Your revolution was kidnapped, sidetracked and is being held hostage in California.

The connected, digital world wide web promised unlimited information, better living,  freedom of expression and speech and unlimited access to knowledge for everyone.

When the first web pages were created and developed some 20 years ago, no one predicted that four companies would effectively control access, storage, commerce and interactivity, and wield total control over this network.

What seems to be the problem?

It’s been a while since anyone used the expression «information superhighway” because that highway has become a metered service, where a handful of players effectively control what gets shared, sold, stored and seen:

The only entity in this complicated and multi-faceted network that has NOT benefited from the trading of data, is consumers like you and me.

Why should we care?

As consumers we’ve been subject to constant, never-ending  attempts to make us click, subscribe, read, see, share and accept digital services that are fueled by an industrial complex that sees us as data points to be analyzed and traded.

Retargeting of ads based on our behavior, limited offering of products and services deemed the most click-friendly or the tracking cookies with it’s generic terms and conditions. We’ve unwittingly consented to the use of our data and paved the way for mega-rich entrepreneurs, who in turn have willfully dished up fake news, impacted the presidential election of a superpower, served as a platform for hate and cyber trolling, and created panic and outrage across the planet—reducing the rest of us to “content providers” on their platforms.

So what will happen??

Like sexist, corrupt or consumer hostile industries of the past, so too must the sun begin to set on the uninhibited attitude and indifferent behavior of the “big Four”. Here are the sign-of-the-times bullet points that predict what will be driving change in 2018:

What does it mean for me, and what can I do??

The deconstruction and disassembly of the giant “walled gardens” of Google, Facebook, Amazon and Apple will not happen without its fair share of turbulence. Empires and fortunes are at stake, and there is no reason to expect this to be an overnight change from a party of four mega corporations to a utopian distribution of wealth. But there is something we all can do in an effort to support the change that is inevitable and to speed it along.

So here are some late, but equally important resolutions for you to take online in 2018:

Your choices and actions as a consumer will have an increasingly bigger impact on these changes then you might first think. Nobody likes change, but open your mind to the possibilities it brings, its development—it’s for a greater good.